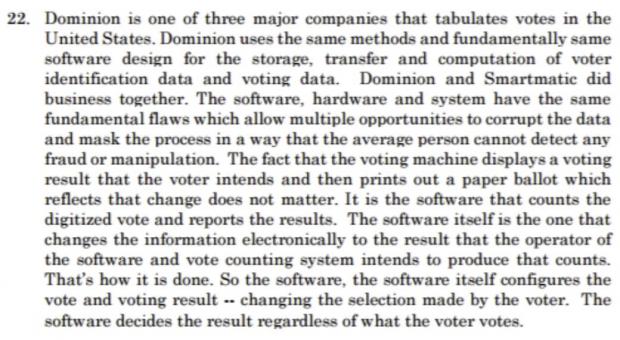 I withdraw that doubt. Among Wikileaks' releases of US Government data there is a classified cable that establishes the essential truth of the legal team's charges.

On July 10, 2006, the US Embassy's political counselor in Caracas Venezuela , Robert Downes, sent a classified able to Washington.  You can read the entire cabel here:  https://wikileaks.org/plusd/cables/06CARACAS2063_a.html

The cable reads in part:

"The Venezuelan-owned Smartmatic Corporation is a riddle both in ownership and operation, complicated by the fact that its machines have overseen several landslide (and contested) victories by President Hugo Chavez and his supporters.  The electronic voting company went from a small technology startup to a market player in just a few years, catapulted by its participation in the August 2004 recall referendum.  Smartmatic has claimed to be of U.S. origin, but its true owners — probably elite Venezuelans of several political strains — remain hidden behind a web of holding companies in the Netherlands and Barbados.  The Smartmatic machines used in Venezuela are widely suspected of, though never proven conclusively to be, susceptible to fraud."