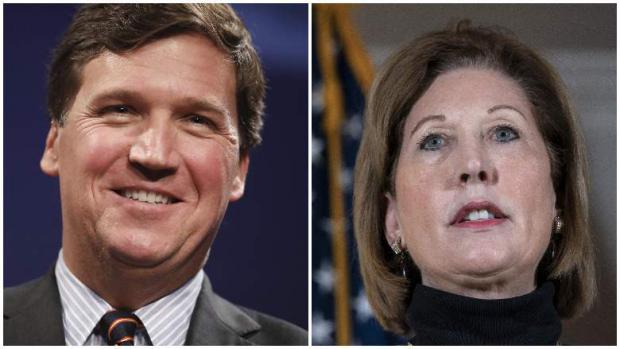 Tucker Carlson on Friday once again challenged Trump campaign attorney Sidney Powell to produce evidence proving her allegation that millions of votes cast in favor of the president were fraudulently switched.

The Fox News host responded to Powell, who earlier on Friday accused Carlson of being 'very insulting, demanding, and rude.'

'We've heard from a lot of people about that segment, including people in the White House and people close to the president,' Carlson said on Friday, referencing his remarks on Thursday about Powell.

'Like us, they have concluded this election was not fair. Like us, they are willing to believe any explanation for what happened,' Carlson said.

He then added: 'Like us, they have not seen a single piece of evidence showing that software changed votes.'

Carlson said that while it 'might have happened,' no evidence has been produced to prove it happened.

'And by "they," we are including other members of Donald Trump's own legal team.

'They have not seen Powell's evidence either - no testimony from employees inside the software companies, no damning internal documents, no copies of the software itself, so that's where we are.'

Carlson then noted that Powell has said she can prove her claims.

'As far as we are concerned, that is great news,' he said.

'If Sidney Powell can prove that technology companies switched millions of votes and stole the presidential election, she will have almost single-handedly uncovered the greatest crime in the history of this country and no one will be more grateful for that than us.'