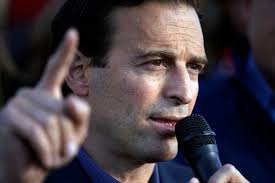 The election contest (pdf), filed in Carson City District Court by Nevada Electoral College candidates who pledged to President Donald Trump, is contesting the results of the presidential election in Nevada. It alleges "substantial irregularities, improprieties, and fraud" that occurred in the election, and that Nevada election officials put in effect an election system that was "highly susceptible to fraud and abuse."

"Evidence will show that the nature and scale of that fraud and abuse renders the purported results of the Nevada election illegitimate," the lawsuit read.

"We are presenting today in our formal contest, that there are north of 15,000 people who voted in Nevada and another state. We are presenting that people that had already done a change of address and left the state outside of the 30 day requirement, their ballots were still cast. We are also presenting dead voters," he told a news conference on Tuesday.

He took issue with Clark County's system whereby a complaint has to be lodged in order for an issue to be investigated regarding a contested vote.

"I will only leave one example: If a person has died, and that ballot was mailed to someone's home, and someone voted that ballot, who is going to complain about that vote cast? No one, quite clearly. So the system isn't investigating these things," Laxalt said.