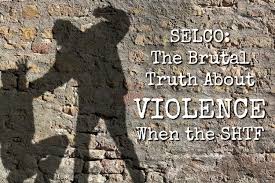 Are you prepared for the extreme violence that is likely to come your way if the SHTF? No matter what your plan is, it's entirely probable that at some point, you'll be the victim of violence or have to perpetrate violence to survive. As always, Selco is our go-to guy on SHTF reality checks and this thought-provoking interview will shake you to your core.

If you don't know Selco, he's from Bosnia and he lived through a year in a city that was blockaded with no utilities, no deliveries of supplies, and no services. In his interviews, he shares what the scenarios the rest of us theorize about were REALLY like.  He mentioned to me recently that most folks aren't prepared for the violence that is part and parcel of a collapse, which brings us to today's interview.

For more of Selco's personal stories, check out his paperback books, The Dark Secrets of SHTF Survival and SHTF Survival Stories: Memories from the Balkan War.  His newest book based on his course, SHTF Survival Bootcamp, is also available on Amazon.

With the recent uptick in violent riots and outright armed conflict in our streets, this article seemed especially timely and worth another look.

How prevalent was violence when the SHTF in Bosnia?

It was wartime and chaos, from all conflicts in those years in the Balkan region Bosnian conflict was most brutal because of multiple reasons, historical, political and other.

To simplify the explanation why violence was common and very brutal, you need to picture a situation where you are "bombarded" with huge amount of information (propaganda) which instills in you very strong feelings of fear and hate.