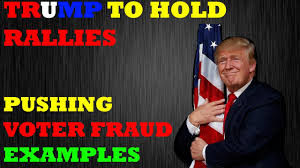 The group of rallies, first reported Sunday by Axios, will be focused on highlighting the Trump campaign's legal effort to win back a lost election by highlighting specific examples of voter fraud.

The obituaries specifically are meant to act as evidence that President-elect Joe Biden won the election by what the Trump team has repeatedly referred to as "illegal" votes.

Reached for comment by The Post, Trump campaign communications director Tim Murtaugh denied that the rallies would involve the president himself.

"These would be grassroots rallies, as we've already seen pop up in a variety of states since Election Day, organic shows of support like the tractor and boat parades have been all year. These is no plan for the president to hold rallies," he said in a statement.

While specific locations and dates have not yet been announced, the Trump team is focusing their efforts on the must-win swing states of Arizona, Georgia and Pennsylvania, although other states could be included, a campaign official told the Post.