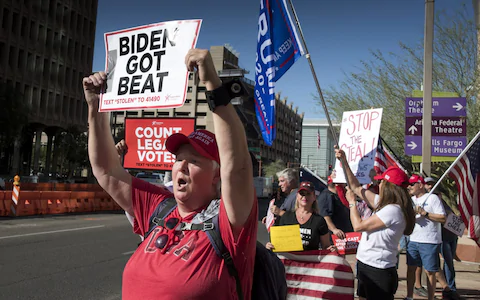 (Natural News) President Donald Trump is being exactly who we wanted him to be in the face of post-election controversy and what appears to be massive Democratic vote efforts: A fighter.

We've said it before because it's true — lesser Republicans would have caved long ago under the withering, endless assaults President Trump has endured from the media, the deep state, the intelligence community, Democrats, and 'RINO' Republicans.

But not Donald Trump. He's been a fighter all of his life and he's going to continue fighting off efforts by Democrats and the underhanded Republicans helping them to steal his reelection.

But in the meantime, the campaign has established a hotline and a website where Americans who believe they were disenfranchised by Democrats can report voting irregularities:

Campaign manager Bill Stepien expressed confidence in Donald Trump winning his second term. He said that internal data shows Trump winning the commonwealth of Pennsylvania by more than 200,000 votes if all the ballots counted are legal.

Stepien also tore into the "lying, cheating, and stealing" by Democrats "all over this country." He is referring to apparent irregularities such as extremely high voter turnout in some areas, shady ballot counting, dead people voting, and other suspicious behavior, which are happening particularly in states that Trump needs to win.