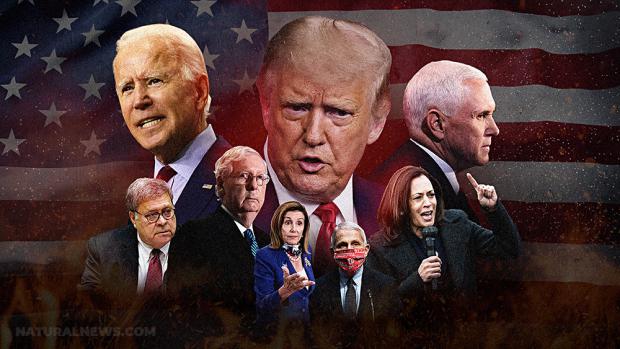 (Natural News) What if I told you the globalists want Trump to win the election fight by having votes tossed out by the courts? Would you be shocked to learn that globalists (and the deep state) are maneuvering Trump and America into precisely the scenario they wanted in order to unleash a full kinetic coup and final destruction of our constitutional republic?

Everything you are seeing right now in the media is theater. Biden isn't the winner, but they want low-information Americans to believe he is. That way, when Trump achieves a court victory by exposing all the election fraud that took place, Big Tech and the news networks can claim Trump "stole" the election yet again. The emotional impact on those Biden supporters who are right now celebrating in the streets will be unfathomable, and it will unleash the kinetic coup that globalists see as necessary to deal the final blow against the United States of America.

If Biden maintains his "win," on the other hand, the Leftists footsoldiers can't be whipped up into an emotional fervor. They are happy and celebrating right now, and that's not what the globalists and deep staters really want. Joe Biden as president may put the White House under the control of communist China, but it doesn't destroy the nation overnight. Especially not when SCOTUS now leans conservative, and with the Senate and state legislatures mostly still held by the GOP. Trump culture is also still very much alive and well across America, even if Trump himself isn't in the White House.

To really deal a death blow to America, globalists and the deep state need to create the illusion that Biden has won the election, then allow Trump to "steal" it from them with a court victory. Why do you think they left a massive trail of election fraud in Wisconsin, Michigan and Pennsylvania? They couldn't possibly think their blatant fraud would go unchallenged, and they know Trump's team is capable of fielding expert lawyers who can successfully argue in the courts for tossing out questionable ballots.