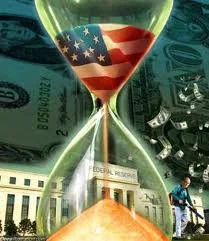 This piece is being written as voters are going to the polls on election day in the United States. While it has been useful to consider how things might change, possibly for the worse, one must also recognize that much of what happens in the U.S. and in its far-flung empire operates by virtue of its own internal dynamics and rules, something that is often referred to as the "Deep State" or perhaps more accurately as the Establishment.

Witness for example the occasional possibly sincere but unsuccessful White House attempts over the past four years to withdraw or reduce the numbers of U.S. troops embroiled in various armed conflicts worldwide. All of those initiatives have been frustrated or redirected in one way or another and it is not simply a question of bungling by a politically insensitive Donald Trump versus the result that might have been obtained by a more experienced and responsible Democrat. What drives the empire's engine is essentially bipartisan, even in its own way, apolitical, existing as it does as a form of leaderless shadow government that functions as a community-of-interest rather than a bureaucracy. It is inclusive and reflective of the real centers of power in the country, namely the national security state and Wall Street.

In a recent article Pepe Escobar dispels any expectation that a kinder, gentler foreign policy might emerge from the election. He describes with some alarm how victory by Biden will mean that the national security "Blob" team that wrecked Syria, Yemen, Ukraine and Libya while also assassinating Americans overseas under President Barack Obama will be back. He cites former CIA presidential briefer Ray McGovern who persuasively describes the "Blob" as the MICIMATT (the Military-Industrial-Congressional-Intelligence-Media-Academia-Think-Tank complex). One might well add the Federal Reserve Bank to that list.

So, the engine keeps chugging on, driven my its own self-interests and completely oblivious to what is going on around it. The irony is that the crisis in confidence that simultaneously is besetting the United States in part reflects a very real, largely self-inflicted decline in America's place in the world due to insistence that it maintain global hegemony. It comes at a time when the empire is entering into a phase of increasing irrelevancy which many of the key players involved are either unable or unwilling to recognize, no matter what their political affiliation might be. That means that the United States is locked into a pattern of behavior that it is incapable of changing. It is a nation that has become addicted to war for no good reason, and that addiction has brought neither security nor prosperity.