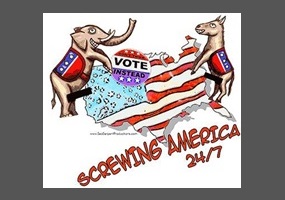 As of Friday, November 6, the votes are still being counted in at least six states. The large pro-Trump margins that seemed to prevail late election night have now disappeared as mail in votes, many of doubtful legality have begun to trickle in. Large Democratically-controlled cities like Philadelphia, Detroit, and Atlanta have miraculously produced tranches of almost completely Biden votes—legal Republican poll watchers have been excluded from observing the vote count—mail-in votes with unverified signatures of doubtful provenance have been counted. In short the safeguards that would guarantee a fair election have been egregiously ignored and violated.

Philadelphia, heavily Democratic and where armed Black militia groups have been known to exert what they call "vigilance" over polling places, once again seems like "ground zero" in this year's election. Whereas almost all counties in Pennsylvania were strongly supportive of the president, the local machine in urban Philadelphia was once again grinding out huge—and unbelievable—majorities for Joe Biden, almost like clockwork.

Can a truly fair election be held when what is essentially a political mafia masquerading as a political party has a stranglehold not only on how votes are counted but, more importantly, which votes are counted—and when? Is this what has become of the American republic?

President Trump may well lose this presidential election. But if he does, there will always be a lurking and burning question: Is this really what happened? Was not this election, in fact, stolen?

I realize some may dislike my language, and even reading this very question may seem distasteful. How dare I raise such a specter, such a possibility in our great democracy?