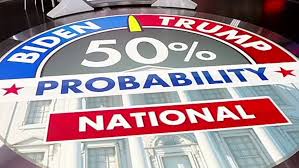 The Left clearly feels that they have done enough cheating to steal the election by a large margin. After all, they did mail out over 80 million ballots. This is why there are election records from early voting. They are ballots received from dead dogs, Democratic Party aborted fetuses, Arkancided Hillary victims, dementia patients from nursing homes, ghosts from Halloween, Democrats who received multiple ballots. In 331 county jurisdictions, as reported by Judicial Watch, there are more registered voters than there are people!

These kinds of articles are very difficult to write because there are so many moving parts.  I have gathered facts that I have been told by so-called "insider sources" about what is coming.  Some of the expected Deep State insurrection has been rehearsed by local, state and federal law enforcement. Much of what follows comes from these types of sources.

I want to emphasize that there are rehearsals that are currently being practiced by the traitors and their in-country foreign assets. However, most of what is anticipated in this properly labeled, Bolshevik Revolution, is assumed by the modus operandi of the embedded foreign assets in our country and what has constituted past practice.