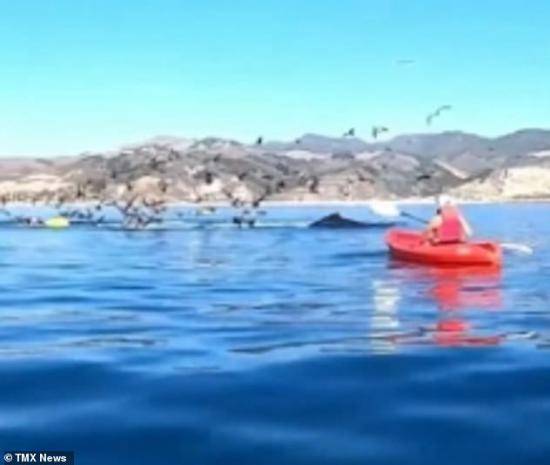 A humpback whale nearly swallowed two women whole when it leaped out of the water into their kayak.

The pair were sat in a kayak watching the whales below the surface when they had their close call.

Footage taken by another whale watcher shows the mammal scoop up the boat and the two friends, taking everyone by surprise.

The pair were lifted into the air in the jaws of the whale but they fortunately managed to escape.

Concerned paddleboarders and kayakers quickly rushed over to help the two women.

The pair managed to retrieve the kayak and ride it back to shore.

Liz said: 'We got back to the car, I was shaking my shirt and a bunch of fish came out of my shirt.'

The only damage was Julie losing her car keys in the close call but both survived unharmed.

Liz said: 'I was infatuated by them and in awe. But I never expected one to be right here, in my face!'