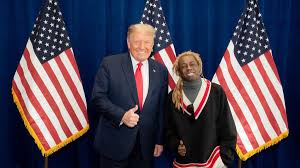 The 38-year-old rapper, whose real name is Dwayne Michael Carter Jr., shared a picture of himself standing beside the president.

"Just had a great meeting with @realdonaldtrump @potus besides what he's done so far with criminal reform, the platinum plan is going to give the community real ownership. He listened to what we had to say today and assured he will and can get it done," Lil Wayne wrote on Twitter.

Trump's Platinum Plan, released by his reelection campaign on Sept. 25, is a list that outlines how the president intends to uplift the black community in America.

"After years of neglect by Democrat politicians, Black Americans have finally found a true advocate in President Trump, who is working tirelessly to deliver greater opportunity, security, prosperity, and fairness to their communities," the Trump campaign website stated.