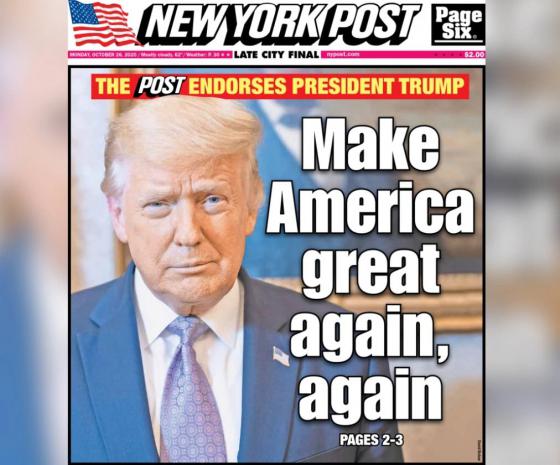 The Post noted a number of successes that Trump has had. For example, on the economy.

They also hailed his record on judges.

"Most importantly, throughout his time in office and culminating with the nomination of Amy Coney Barrett, Trump's judicial appointments promise to curb the leftward shift of the courts and the activism that Democrats have come to count on. The left has achieved through legal decisions what it couldn't through legislation."

The Post even noted Trump has done better on COVID-19 than many people realize.

"Joe Biden has tried to make this election about the coronavirus, but it's unclear he'd do anything different except trigger new lockdowns — a strategy the WHO now discourages. Trump is criticized for his early handling of the virus, but his institution of a travel ban and aid to the states undoubtedly saved lives. The same perfect hindsight the media expects of the president they rarely apply to others Consider that Gov. Andrew Cuomo wrote a self-praising book about his response to COVID-19, even though New York's death toll is higher than that of any other state. And because he's a Democrat, the media let him get away with it! Today, those who are infected with the coronavirus survive at much higher rates. We are likely to have a vaccine in the coming months, far earlier than many experts thought possible. The media don't want to admit it, but that's all thanks to the "warp speed" policy instituted by the White House."