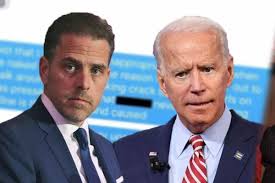 Giuliani claimed that he was merely retucking in his shirt after removing some recording equipment, but nevertheless, the whole news cycle played out in full view of the public as social media giants like Twitter and Facebook looked the other way, allowing the photo, and links to news stories covering the controversy (orchestrated by "Borat" prankster Sasha Baron Cohen) to circulate widely.

However, just days later, a Chinese digital media company has published footage showing a man who looks identical to Hunter Biden engaging in a sex fetish act with an unidentifiable woman (along with a photo purporting to show what appears to be the same man engaging in sex with a Ukrainian prostitute). But instead of allowing discussion and links to the video to circulate, Twitter has scrubbed all links and photos related to the video and story, and is suspending accounts that appear to be trying to spread the video or screenshots from the footage.

In it, a naked Hunter Biden can be seen, smoking crack, and laying with an unidentified woman, possibly a prostitute. The woman's face is blurred out, making it impossible to tell whether or not she appeared to be underage.