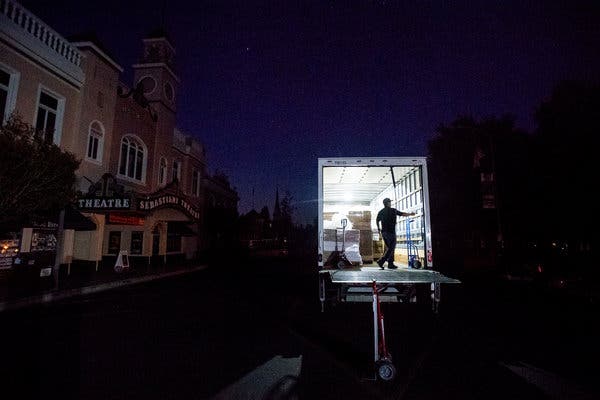 The company may preemptively cut power to 466,000 homes and businesses -- an estimated 1.4 million people -- across Northern California starting early Sunday, according to its website. The outages are poised to hit large swaths of the San Francisco Bay area, the Sierra Nevada foothills, the Central Valley and the Central Coast.

The potential blackouts would be the latest blow for a state that's been battered by extreme weather and has already seen a record 4.1 million acres (1.66 million hectares) scorched this year. PG&E has preemptively cut power four times in 2020 to prevent falling wires from igniting blazes in a region that's tinder dry from heat and drought. The new round of outages would be the biggest by far, stretching across 38 counties.

Winds starting this weekend are forecast to reach 70 miles (113 kilometers) per hour in the northern part of the state, with gusts expected to last through Tuesday morning. By Monday, humidity will be as low as 6% in Redding and just 5% in Grass Valley, according to the National Weather Service. It comes as the state is already riddled with dry brush and grasses due to the hottest average temperatures over the last six months, according to records that go back 126 years, said Scott Strenfel, PG&E's head of meteorology and fire science.

The blackouts may hit densely populated parts of the San Francisco metropolitan area, including portions of Oakland, Berkeley and Marin County -- cutting power to many residents as they are working from home due to the coronavirus pandemic. San Francisco, at relatively low risk of fires, is the only county in the Bay Area region not expected to be affected.