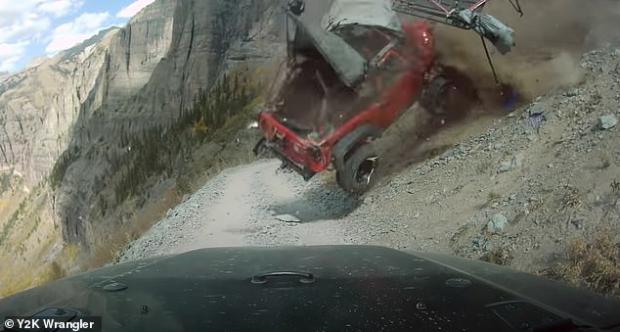 A Jeep Wrangler plummeted off a dangerous Colorado cliff side, ejecting a 23-year-old woman who suffered spinal injuries.

The frightening incident was captured via dash camera by another driver navigating through Black Bear Pass, a Jeep trail near Telluride that is notorious for its difficult terrain and potential danger.

The San Miguel Country Sheriff's Office revealed that the passenger, Suzie Rhodes, had 'serious traumatic injuries' after the incident on October 10.

Footage shows the witness' car slowly edging through the pass, which has a peak of 12,840 feet and is riddled with switchbacks.

Suddenly a red Jeep Wrangler - already crumpled and contorted by the crash - plunges down the cliff side and falls onto the dirt trail in front of the witness.

The vehicle's roof hangs on by slim pieces of metal while personal belongings, like backpacks, are wildly swinging through the air. One of the Jeep's tires is forced off as it continues to tumble down switchbacks.

Rhodes, as well as her two dogs, were passengers inside the vehicle at the time of the incident. All three of them were ejected from the vehicle just seconds before it flew past the dash camera.

According to the San Miguel Sheriff's Office, the 22-year-old Jeep Wrangler driver said he had parked the vehicle before the incident.

'The 22yr old male, who was the driver of the Jeep Wrangler Sport, told deputies he had shut off the engine, applied the emergency brake and stepped out of the vehicle to help direct a driver behind him around a tight turn,' they wrote.