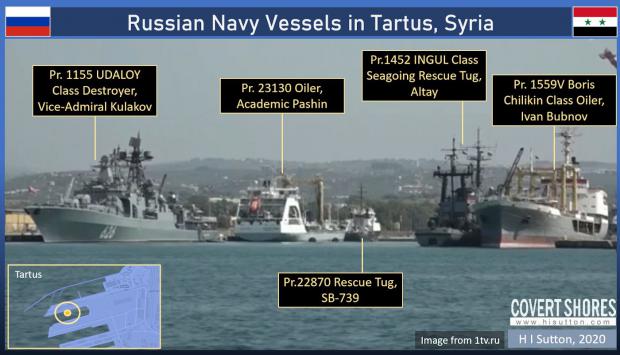 Russia's role in protecting the shipment may change the dynamics in the Eastern Mediterranean. In the past, Iranian tankers sailing to Syria have been intercepted by the U.K. Royal Navy. The Russian Navy escort could be viewed as a precautionary step, raising the political and military risks of any intervention by the Royal Navy or others.

Last July, an Iranian tanker destined for Syria, Adrian Darya-1, was seized by U.K. Royal Marines off Gibraltar. The British accused Iran of supplying Syria with oil in contravention of European Union sanctions. Iran quickly seized a British-flagged tanker in a likely retaliatory move. Eventually, in September, Adrian Darya-1 was released by a local court with the assurance that it would not deliver its oil to Syria – but days later, it transshipped its oil in Syrian waters.

Samah has taken the shorter Suez Canal route, avoiding the Strait of Gibraltar. According to data provided by MarineTraffic.com, after exiting the Suez Canal Samah disappeared from automated identification system tracking. AIS is a system used to alert ships of each other's presence and is required to be used by ships of this size.