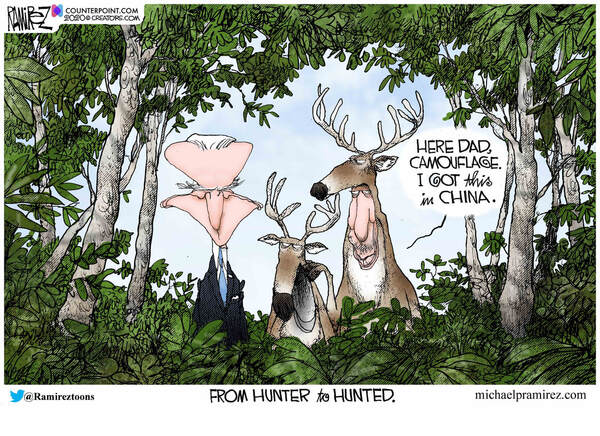 Hunter in costume says, "Here, Dad, Camouflage. I got this in China." In his usual pithy style Ramirez evokes the scandal of Hunter's using his dad's position as vice-president to rake in substantial bribes for access for the Chinese.

[Update: Michael Ramirez was so pleased with the reference to his cartoon that he gave American Thinker permission to reprint it.]

China was not alone in lining the Biden family's pockets with millions of dollars.  So did corrupt officials of Ukraine and more particularly the Ukrainian energy company Burisma. And the Hunter peculation continued with a tribal bond scheme that landed one of his partners in jail, a partner whose emails to and from Hunter are now in the hands of those determined to unmask the Bidens' misdeeds -- and the FBI's hiding and failing to act on them.

There is no question that the FBI had access to the same material and seems to have done nothing with it. Nor did the Special Counsel.

...the U.S. federal government had every reason to know that associates of Hunter Biden, who himself had obtained a lucrative deal with a Ukrainian gas company, were being prosecuted for a massive fraud scheme -- with one participant, Devon Archer, identified in both activities -- at the same time the U.S. federal government was probing the partly contemporaneous dealings of Paul Manafort and Rick Gates in Ukraine with an electric cattle prod.