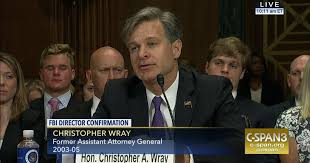 Before the letter, Collins had already called for Wray's resignation in August. During an interview with Fox News' Jeanine Pirro, Collins urged the FBI director to "move on" and "get out of the way" as the agency's "constant feet-dragging" on the issue of espionage during President Donald Trump's 2016 campaign has delayed Congress investigations for months.

"It's time for him to go, he's been a problem. It's time to get the FBI cleaned out," the congressman added.

Collins' Sept. 30 letter came after a revelation that the FBI was in the loop about Trump's alleged ties with Russia being a product of Hillary Clinton's presidential campaign, with the lawmaker remarking the agency was complicit due to its refusal to act on this new information.

Meanwhile, the bureau responded to Collins via an email to The Epoch Times: "The FBI has been, and will continue to be, fully cooperative with all congressional inquiries, and Department of Justice reviews."

Even the president himself has an issue with Wray

Trump used his Twitter account to chastise Wray and the FBI at large after the director testified during a Sept. 17 House Homeland Security Committee hearing. Asked about far-left Antifa that the president classified as a hate group, Wray told lawmakers that "it's not a group or an organization. It's a movement or an ideology."

According to a Sept. 18 tweet, the president looked at Antifa as "a bunch of well-funded anarchists and thugs … that get away with 'murder'". He also took a jab at the FBI, saying that its inability or unwillingness to find Antifa funding sources renders the group immune to any prosecution.

In a separate tweet, Trump gave Wray a possible lead to investigate: Instead of focusing on Russia, the FBI director should look at China and its possible interference in the 2020 presidential elections using mail-in ballots. (Related: China trying to interfere in the 2020 elections: U.S. Customs intercepts nearly 20,000 FAKE driver's licenses that could be used for voting.)