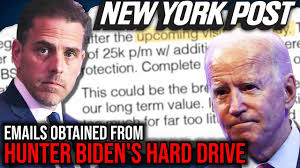 According to a smoking gun text on Hunter Biden's hard drive, members of "the Biden crime family" were expected to give half of their profits to "pop"—aka Joe Biden.

Several members of the Biden's clan, including his brother James Biden, his sister-in-law Sara, and his son Hunter, landed lucrative positions or contracts with foreign countries while Joe Biden was a U.S. senator as well as when he served as vice president.

"In future days, you will see texts, emails and photos that demonstrate crimes committed by the Biden crime family in China (probably most of all), in Russia, and several other countries," Giuliani said, noting that America's foreign adversaries likely have the same scandalous photos of the former crack addict that he's seen—making the election of Joe Biden a massive national security risk.

Hunter Biden's emails come from an Apple laptop that was dropped off at a computer repair shop in Wilmington, Delaware for repairs and then abandoned.

John Paul Mac Isaac, the owner of the repair shop, took legal possession of the laptop after the person who dropped it off didn't come back within 90 days to claim it.