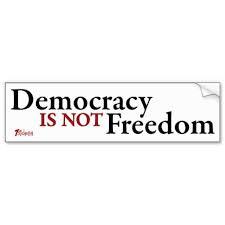 Democracy enables people to elect public officials. That's all. That's in contrast to countries that are ruled by people that are not democratically elected, such as kingdoms or militarily controlled regimes.

But the right to elect one's government officials doesn't guarantee a free society. Freedom is determined by the powers wielded by the government. If government's powers are limited to their legitimate function, then people in that society will be free. And that's true whether government officials are democratically elected or not.

The only real benefit of a democratic system is that people can peacefully change public officials, especially when there is a change in overall philosophies within society. With unelected regimes, the only way to change officials is through revolution, which can be costly in terms of life, property, and money.