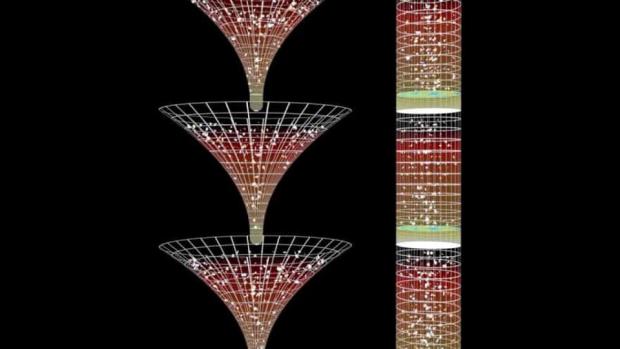 Penrose has used the renewed attention to push his 30-year old concept of Hawking Points and cyclic universes. This theory challenges the theory of cosmic inflation.

Above – CMB sky, marking 6 most prominent raised-temperature circular spots, found both in Planck and WMAP data; argued to be results of Hawking radiation from supermassive black holes in a previous aeon

Cosmic inflation is the forty-year-old theory that the universe expanded at a much higher rate than the speed of light in the first fractions of a second after the Big Bang. Penrose proposed a counter-concept of Conformal Cyclic Cosmology (CCC) by which Inflation is moved to before the Big Bang and which introduces the idea of preceding aeons. There were universes before our universe.

Analysis of the Cosmic Microwave Background (CMB) by Roger Penrose, Daniel An, Krzysztof Meissner and Pawel Nurowski has revealed, both in the Planck and WMAP satellite data (at 99.98% confidence), a powerful signal that had never been noticed previously. there are circular spots ∼8 times the diameter of the full moon. The brightest six are ∼30 times the average CMB temperature variations seen at precisely the same locations in the Planck and WMAP data.

The inflationary phase of standard cosmology should have obliterated any such features.

In CCC, there is an infinite succession of aeons, each having a big-bang origin which is the conformal continuation or the exponentially expanding remote future of the preceding aeon.