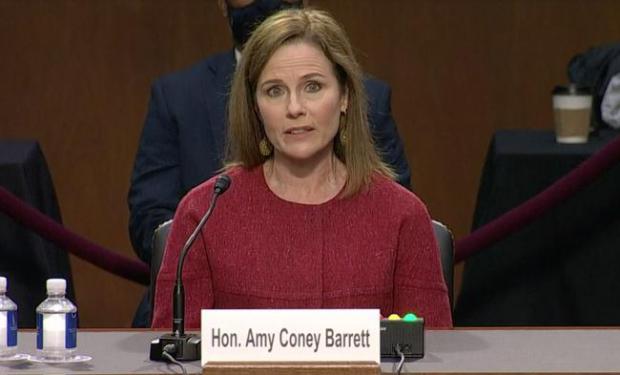 Update (0945ET): One of the highlights of Tuesday's Senate confirmation hearing mercifully arrived early in the session as Sen. Dianne Feinstein, the ranking member of the committee, grilled Amy Coney Barrett on whether she would overturn Roe v Wade, an issue that has obsessed Democrats and leftists, who have repeatedly claimed, with the nomination of each new SCOTUS justice, that abortion rights in the US would effectively be doomed.

Feinstein started the interlocution by asking Judge Barrett to introduce the mob of family members (children, siblings etc). She then launched into a review of Barrett's ties to Justice Antonin Scalia, for whom she clerked before embarking on her own career as a judge, before asking Barrett whether she supported Scalia's view that the precedent set by Roe v Wade should be thrown out.

This started a back and forth as Feinstein repeatedly tried to press the question, with Barrett responding that she wouldn't say whether she thought the decision was wrongly decided because "it's contours" could come up again before the court. She added "I don't have any agenda" regarding her personal feelings about abortion, saying again that she would follow the law whereever it leads.

Feinstein ultimately replied that "it's distressing not to get a straight answer".

So Feinstein asks about precedent in Roe v Wade.

It's going to be a long day of Democrats asking ACB if she will follow precedent and ACB not answering.