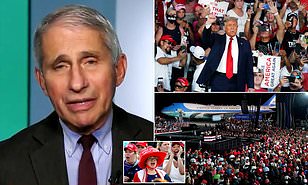 Dr. Fauci says it would be "outrageous" if Trump used him in another ad

Florida reports the smallest daily increase in a week

the US and India see new cases decline

Update (1830ET): Dr. Anthony Fauci told CNN on Monday that it would be "outrageous" if the Trump campaign kept using clips of him in its campaign ads after he asked the campaign to desist.

In a separate interview, he said that by using the clips without his permission, the administration is "in effect harassing me", according to the Daily Beast. Dr. Fauci said yesterday that he didn't approve of the campaign using the clip from a press briefing in a way that he said was misleading.

Dr. Fauci has long prided himself on being "apolitical". He also told CNN that Trump's decision to hold nearly daily campaign rallies until Nov. 3 was like "asking for trouble."

Trump Campaign spokesman Tim Murtaugh defended the ad in a statement on Monday, saying "these are Dr. Fauci's own words. The video is from a nationally broadcast television interview in which Dr. Fauci was praising the work of the Trump administration. The words spoken are accurate, and directly from Dr. Fauci's mouth."