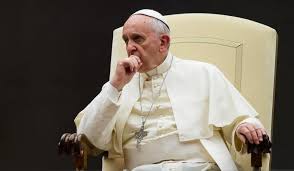 Pope Francis rejected the concept of an absolute right to property for individuals, which is a defining feature of communism. Francis falsely blamed the loss of millions of jobs on the virus, but the economy was destroyed by governments forcing lockdowns and shutting down businesses.

Pope Francis says the coronavirus pandemic has proven that the "magic theories" of market capitalism have failed and that the world needs a new type of politics that promotes dialogue and solidarity and rejects war at all costs.

Francis on Sunday laid out his vision for a post-COVID world by uniting the core elements of his social teachings into a new encyclical aimed at inspiring a revived sense of the human family. "Fratelli Tutti" (Brothers All) was released on the feast day of his namesake, the peace-loving St. Francis of Assisi.

The document draws its inspiration from the teachings of St. Francis and the pope's previous preaching on the injustices of the global economy and its destruction of the planet and pairs them with his call for greater human solidarity to confront the "dark clouds over a closed world."

In the encyclical, Francis rejected even the Catholic Church's own doctrine justifying war as a means of legitimate defense, saying it had been too broadly applied over the centuries and was no longer viable.