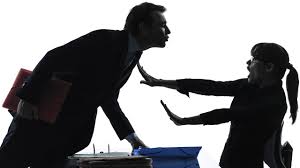 At first she politely rejected his advances, fearing that reporting these instances would be met with retaliation. But soon it turned into sexual harassment, and she was forced to contact his superiors. But nothing changed. Until one day, the social worker exploded at Natia, saying, "I don't know where you get off sending all these complaint emails and making all these calls, but you are going to find out that we at [Child Services] stick together, and cover for each other."

Soon after, he lodged claims of child neglect against Natia. She eventually fought off the completely unsubstantiated charges.

Natia then sued the social worker and the Department of Children and Family Services for so obviously violating her rights. But the case was dismissed last month. The Judge's decision reads:

"the right of private individuals to be free from sexual harassment at the hands of social workers was not clearly established at the time of defendants' conduct in this case."

Clearly if the parents are in prison, this family has some problems. It is easy to dismiss these cases as the stuff of broken homes. But we have also highlighted a case in the past where children were kidnapped by a SWAT team after the parents disagreed with a doctor over the seriousness of a fever.