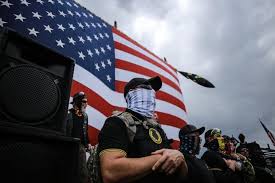 The department's Targeted Violence and Terrorism Prevention program will fund groups such as Life After Hate - founded by reformed white supremacists, which helps people trying to do the same. Another group, the School of Communication at American University, will develop a strategy to combat disinformation 'circulated by the far right online,' and others. Life After Hate was awarded nearly $750,000, while the School of Communication received a $500,000 grant.

One of the largest grants, nearly $750,000, went to Life After Hate, which was founded by former white supremacists and neo-Nazis and works with people trying to leave violent far-right movements. The group was first awarded funding under the Obama-era program but had its grant rescinded soon after Mr. Trump took office. -Wall Street Journal

Life After Hate says they will use the funding for its ExitUSA initiative. Executive director Sammy Rangel says their work "has never been more important," adding "This project follows years of innovation in a space that was largely uncharted."

Another group, the Counter Extremism Project, was awarded $277,755 to collaborate with Parallel Networks, which works with inmates at a San Diego County correctional facility who adhere to both white supremacist of jihadi ideology.

Ep. 2847a - The [CB]/[JB] Attempt To Save The Collapsing Economic Narrative Has Failed

The IRS Goes Away Under NESARA Law

FBI Had Mole Inside Mar-A-Lago: Report

Northern Mexico Runs Out Of Water, May Impact Beer Production

The Smartphone's Role In Dumbing-Down America

Army Wants "tech that can support and integrate --

Media Claims Armed Protesters About To Descend On Mar-a-Lago, People Suspect It Will Be Feds