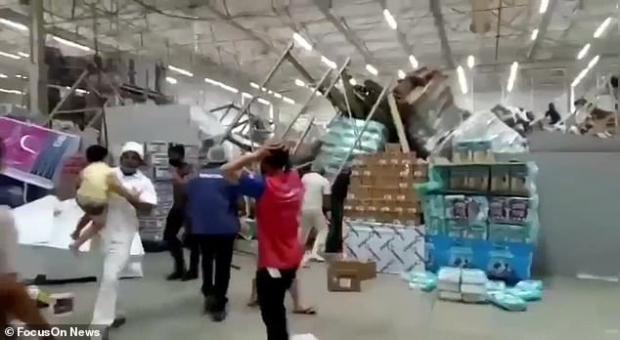 This is the shocking moment towering shelves in a Brazilian supermarket collapse on top of each in a domino effect crushing one worker to death.

Eight people including staff and customers were injured in the accident that happened late Friday night at the Mateus Atacarejo Mix Supermarket in São Luís, north Brazil.

The dead victim was identified as 21-year-old Elane de Oliveira Rodrigues. She had been working at the supermarket for three months and was crushed under the falling products in the aisle where she had been stacking shelves.

Six others who were in the same location were wounded and rescued by emergency services. They were transferred to hospital and have since been released. Two other victims, rescued by people at the scene, suffered abrasions and minor injuries and were allowed to go home.

The retail store was at its busiest, packed with shoppers at the time the disaster struck around 8:15pm.

CCTV captured the moment the metallic structures to the right of the screen started to fall causing a domino effect on other huge shelves in front, stacked high with goods.