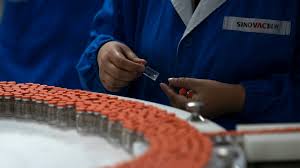 It is an unusual move that raises ethical and safety questions, as companies and governments worldwide race to develop a vaccine that will stop the spread of the coronavirus.

A popular writer and columnist who has been given the vaccine said he had no reaction after the first dose. But after the second dose, Kan Chai felt woozy, saying: "When I was driving on the road, I suddenly felt a bit dizzy, as if I was driving drunk.

"So I specially found a place to stop the car, rest a bit and then I felt better."

Chinese companies earlier drew attention after giving the vaccine to their top executives and leading researchers before human trials to test their safety and efficacy had even begun.

In recent months, they have injected a far larger number under an emergency use designation approved in June, and that number appears poised to rise.

A health official said that China, which claims to have largely controlled the disease, needs to take steps to prevent it from coming back.