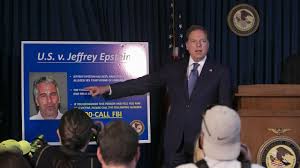 Self-styled public information crusader Angela Clemente sued in May, seeking to force the FBI to release the documents on the grounds that Epstein is now dead, albeit under mysterious circumstances, and that there is an overarching public interest in releasing documents. The Justice Department, representing the FBI, is fighting the effort.

In a status hearing Tuesday morning, Judge Trevor N. McFadden, who sits on the U.S. District Court for the District of Columbia, allowed Clemente's public-records lawsuit to continue. But he also put both sides on notice that he expected some agreement when they come before him again on Oct. 23.

Arguing against a broad document release, Assistant U.S Attorney Brenda Gonzalez Horowitz told the judge the FBI had already released more than 10,000 documents and is likely to invoke an exemption from releasing thousands of additional documents under the Freedom of Information Act, citing a provision that allows records to be kept private during ongoing prosecutions or investigations.