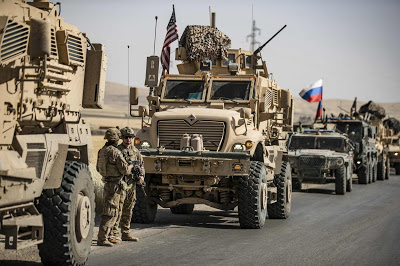 One minute the president is reducing troops in hot zones, a few minutes later he is sending troops into hot zones.

The Pentagon is deploying U.S. troops to Syria after a series of escalating encounters between the U.S. and Russian militaries, reports NBC.

The number of troops being deployed is reportedly small but it sets up one more tripwire that could result in future escalation.

A U.S. official said, "These actions and reinforcements are a clear signal to Russia to adhere to mutual de-confliction processes and for Russia and other parties to avoid unprofessional, unsafe and provocative actions in northeast Syria."

Actually, it is a clear signal that President Trump continues, on certain days, to ignore the wise advice of George Washington in his farewell speech to the United States to stay out of foreign entanglements.

This phase of the Washington-defying entanglement will include six Bradley Fighting Vehicles and fewer than 100 soldiers operating in northeast Syria on a 90-day deployment.