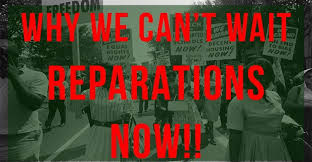 What crazed lefties don't get is that it is about entrepreneurship and production, not handouts and consumption to keep you in the good life.

So I have been thinking a lot about how to provide consumption services to guys like this when they get their reparation checks.

Now, I have black friends who I would put in the Thomas Sowell category but that is not going to be where the action is, it is going to be with guys like the above.