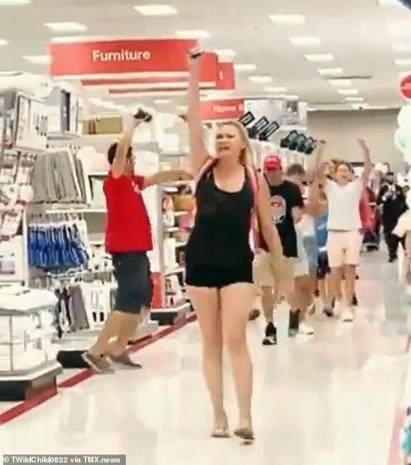 Florida protesters sporting MAGA t-shirts and hats defied COVID safety rules and marched maskless through a Target store shouting 'take off your mask!' during a demonstration this week.

Footage shared online shows a small group of anti-maskers marching through the aisles of the store on North Federal Highway in Fort Lauderdale shouting 'take it off' at other customers and cheering when people apparently complied.

The incident took place in hard-hit Florida where confirmed cases of the deadly virus have now topped 671,000 and the death toll is edging closer to 13,000.

Republican Governor Ron DeSantis has not issued a statewide mask mandate for public places but several businesses - including Target - have nationwide rules requiring customers and staff to sport face coverings inside their buildings.

The video shows the anti-maskers - including some children - parading through the store, with some swinging masks in their hands and none wearing them on their faces.

Some protesters were seen wearing Trump merchandise including 'Make America Great Again' t-shirts and hats while one wore a t-shirt featuring a photo of Barack Obama sporting a Trump hat.

One man in a Trump top - a reference to Trump's refusal to wear a mask for much of the pandemic before backtracking in July - held aloft a speaker blasting the tune 'We're Not Gonna Take It' by Twisted Sister.

The group shouted 'take it off' and 'take your mask off' at customers shopping in the store.