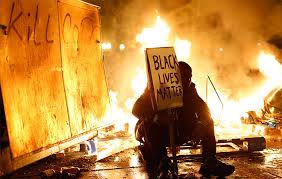 Property Claim Services, a company that tracks insurance claims filed due to riots and the like, found that the left-wing riots that occurred between May 26 and June 8 of this year could reach $2 billion in insurance claims.

Obviously, because the left's domestic terrorism extended well beyond June 8 and is still ongoing, the company acknowledges "this is still happening, so the losses could be significantly more."

Most importantly, these estimates are all being compared based on 2020 dollars. Meaning, previous riots, like the 1992 Rodney King Riots in Los Angeles, cost $775 million in 1992 dollars. That adds up to $1.42 billion today, which is still lower than the $2 billion Black Lives Matter Riots estimate — which again only covers eight or nine days of rioting that has never really stopped.

Here's a piece of perspective that shocked even me…

If you add up the insurance cost in 2020 dollars for all six major American riots during the turbulent 1960s, the total is a little shy of $1.2 billion — which means the terrorists in Antifa and Black Lives Matter caused more mayhem and property damage in a little over a week than this country saw throughout all of the 1960s.

To the surprise of no one, Axios still uses the term "mostly peaceful" to describe what's happening.