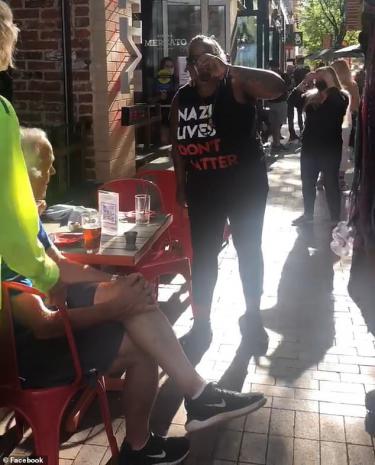 Three people are now facing criminal charges for harassing diners at a restaurant in Pittsburgh during a Black Lives Matter protest over Labor Day weekend.

Misdemeanor charges were filed against Monique Craft, 35, Kenneth McDowell, 33, and Shawn Green, 24, on Monday.  It's unclear whether they've been taken into custody.

A viral video showed the trio and other protesters screaming 'f*** the white people' and yelling other obscenities at diners outside the Sienna Mercato restaurant on Penn Avenue on September 5.

Craft was dubbed the 'beer bandit' after she was seen swiping a drink from an elderly white couple and downing it in front of them before another protester knocked the glass to the ground.

Green, who goes by Lorenzo Rulli, swore at the elderly couple and gave them the finger, according to a police complaint. He also walked up to the front of the restaurant and screamed into an open window.

Police identified McDowell as the 'ringleader' and said he used a megaphone to scream obscenities at diners sitting outside Sienna Mercato and others passing by, as seen in the video.

McDowell was also accused of getting into an alteration with a McDonald's manager in another protest video that went viral.