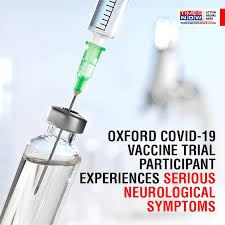 The participant who triggered a global shutdown of AstraZeneca's Phase 3 Covid-19 vaccine trials was a woman in the United Kingdom who experienced neurological symptoms consistent with a rare but serious spinal inflammatory disorder called transverse myelitis, the drug maker's chief executive, Pascal Soriot, said during a private conference call with investors on Wednesday morning.

The woman's diagnosis has not been confirmed yet, but she is improving and will likely be discharged from the hospital as early as Wednesday, Soriot said.

The board tasked with overseeing the data and safety components of the AstraZeneca clinical trials confirmed that the participant was injected with the company's Covid-19 vaccine and not a placebo, Soriot said on the conference call, which was set up by the investment bank J.P. Morgan.

Soriot also confirmed that the clinical trial was halted once previously in July after a participant experienced neurological symptoms. Upon further examination, that participant was diagnosed with multiple sclerosis, deemed to be unrelated to the Covid-19 vaccine treatment, he said.

'An unchartered situation for all of us': From shipping containers to security concerns, a Covid-19 vaccine supply chain takes shape

The new disclosures made by Soriot were heard by three investors participating on the call and were shared with STAT. An AstraZeneca spokesperson did not respond to an email request for further comment.

One investor on the call said Soriot's comments were intended to reassure investors that the company was taking the possible vaccine safety event seriously, and to reverse any damage to the company's stock price. "A vaccine that nobody wants to take is not very useful," said Soriot.

To date, AstraZeneca's public statements on the pause have been sparse with details. For instance, the company has not publicly confirmed that this is the second time its trials have been stopped to investigate health events among participants.