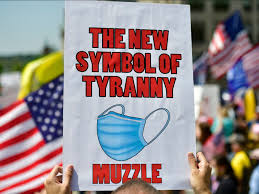 Who cares what a bunch of pro-Constitutional activists, in Kingman, Arizona, are going to unleash in their community as a result of their Mayor, Mad Dog Miles, and their self-presumed upwardly mobile City Council is going to impose  on their citizens? The people in Kingdom are about ready to suffer under a tyranny that has invaded so many communities which I is a far-reaching, unconstitutional set of face mask mandates. On the evening of September 15, 2020, these political despots in Kingman, are bringing down the political hammer. However, these same despots have not idea what is about to be unleashed against them. I predict that Kingman will be the spark that will light the proverbial fire of successful political dissent and a move back in the direction of normalcy on our terms, the terms of the Constitution.

What is going on in Kingman can serve as a role model for the rest of the country on how we can end these lockdowns and remove, from power, the depots who have ruined our businesses, our lives, our recreation, our physical health, the devastation of law and order in this country, a greatly increased suicide rate in our country, and an overall morass of negativity which now permeates our country as well as a diminishment of satisfying and much-needed personal interactions. And for what reasons have we allowed these tyrants to do this to us? A pandemic you say? A pandemic in which there are no bodies in the street? A pandemic in which you have to take a test to find out if one has caught the pandemic? What a joke!!!  And by the way, the pandemic testing, according to the Commissioner of the FDA, in an April 18th publicly replaced statement, declared that they were not validated for accuracy by the FDA or the test manufacturers. In other words, America, you have no valid COVID-19 test, and just like the election polls, the numbers are totally fake because they cannot be verified. In lieu of this medical fraud, communities like Kingman, and your community too, are being forced to cover their mouth and nose with face diapers which have no proven scientific efficacy. Fauci, in March, said Face Masks don't work. But Bill Gates got him to a flip flop. However, the CDC says that masks do not work to prevent the spread of a virus. But we accept that they do just that without scientific verification and give a blank check to the elected demogogues of Kingman to impose this tyranny upon their people.

The Symbolism of a Face Mask

The importance of the face mask issue goes way beyond the wearing of the tyrannically mandated face diaper, it is symbol for the victory of tyranny over liberty and state mandates over civil liberties. If the state can make you cover your face without scientific justification, for a virus that only attacks the elderly with underlying  and terminal health conditions, then that same state can take your job, which they have done. They can take your finances, which they have they done. They can take food off of your children's plate, which they have done and they can take your property and shut of your utilities, which they have done in California. Further, they can burn down your house and business which they have allowed to happen all over this country and they can eventually take your life for noncompliance. Oh, you don't believe the last statement? Then why is the Governor of Ohio mandating FEMA camps, in undisclosed locations, for people who are SUSPECTED, but not scientifically verified, who MAY have COVID-19? Don't believe it? Believe it, he is being sued for this heinous act of tyanny