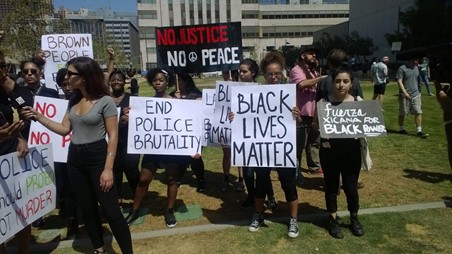 This phrase is on everyone's lips, on front yard signs, placards, billboards and even, in very large letters, on the streets of not just a few cities. It is the rare newspaper that appears without commenting upon this phrase each and every day.

In order to make sense of this phenomenon, let us consider a few distinctions.

First, there is the plain old ordinary declarative phrase "black lives matter." Of course they do. Only the most hateful, despicable people would deny this; would say instead that black lives do not matter. Had this phrase been prevalent before the July 2013 acquittal of George Zimmerman in the shooting death of Trayvon Martin in February 2012 when it became popularized, it would have been met by all men of good will with the ho hum response of, "Of course black lives matter. All lives matter, and black lives are part of all lives." End of story. No problem here.