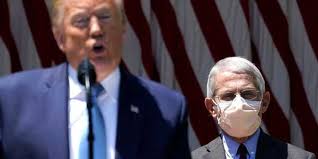 (Natural News) The latest attack on President Trump is focused on his alleged downplaying of the threat of coronavirus. The mainstream media is gleefully reporting that the president did not take the virus seriously, even though a closer look at his actions and comments in the early days of the virus quickly exposes this lie — and now Dr. Anthony Fauci himself has set the record straight.

At the center of the drama is a recording made by journalist Bob Woodward in March in which Trump said that he wanted to downplay the pandemic to avoid creating a panic. The recording was published by the Washington Post, and as usual, the media wants to twist this into evidence that he is a horrible leader who doesn't care about the American people.

However, speaking on Fox News, Dr. Fauci, the director of the National Institute of Allergy and Infectious Diseases and a member of the White House coronavirus task force, said that he does not believe the president distorted any facts about the virus.

When The Daily Briefing host John Roberts asked whether he felt Trump downplayed the virus's threat, Fauci answered: "I didn't get any sense that he was distorting anything. I mean in my discussions with him, they were always straightforward about the concerns that we had."

Roberts also asked Fauci if Trump broke with his advisers in downplaying the threat. Fauci said that he couldn't recall anything that differed between their discussions and the things Trump said publicly.

Woodward also alleges that Fauci said Trump's "sole purpose is to get reelected," but Fauci told Roberts that he does not recall making those comments.

Woodward even admitted that he was "surprised" to find that Trump was focused on the virus in a February 7 interview while Dr. Fauci downplayed the risk.

In a late January interview on Newsmax TV, Fauci said: "But this is not a major threat to the people of the United States, and this is not something that the citizens of the United States right now should be worried about." On February 17, he maintained the risk to Americans was "miniscule" and that people do not need to wear masks.

But Trump told Woodward it was "deadly stuff" that was possibly as much as five times deadlier than the flu. He also told Woodward the virus was airborne, even as the WHO insisted it was not at the time.