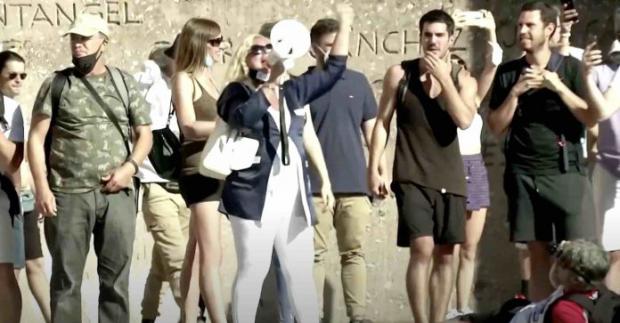 There was a huge rally of the Undiapered in Madrid, attended by thousands, who are tired of being told they're sick and ordered to behave as if they were.

And when police tried to Hut! Hut! Hut! a woman who wasn't wearing a Diaper, people came to her defense, forcing the Diaperers to back off.

It is all really good news – which probably explains why it isn't being reported by the American press.

Which seems to want to report nothing but bad news – even when it has to be made up.

In order to efface the good news.

The most egregious example of this, of course, being the daily hyperventilating over "the cases!" the cases!" and "hot spots" of "cases!" The implication – never directly stated but heavily implied – is that a "case" is tantamount to death, or at least, an illness so serious that it will require medical attention to recover from it.

But the fact is that almost all the "cases" being reported don't even have symptoms.

This is a disease so deadly people only occasionally get sick from it. And of those who do get seriously sick, almost all of them, according to the CDC, "had one or more underlying conditions such as chronic lung disease, diabetes, cardiovascular disease or hypertension."