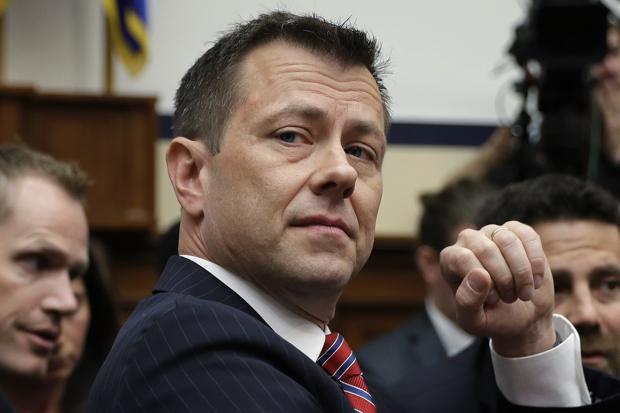 Fired FBI Special Agent Peter Strzok, who played a key role in initiating and leading the bureau's investigation into allegations of Trump-Russia collusion, said he has not been interviewed by U.S. Attorney John Durham.

Strzok was asked about the criminal inquiry into the Trump-Russia investigators, which is being overseen by Attorney General William Barr, during a Tuesday interview with Tony Dokoupil on CBS's This Morning. The host noted that Strzok was potentially "at the center" of the federal prosecutor's inquiry and asked if he has met with Durham's team yet. Strzok said he had not. Dokoupil then asked if Strzok was "a target or a witness." Strzok didn't answer directly, saying, "I've certainly done nothing wrong, so I'm not worried about whatever he may find. If he finds the truth, I'm not worried."

Strzok was deeply involved in the Russia investigation, including the interview of retired Lt. Gen. Michael Flynn and a stint on former special counsel Robert Mueller's team before he was removed following the discovery of his anti-Trump text messages. He came up with the name "Crossfire Hurricane" and authored the "opening electronic communication" that launched the inquiry with the approval from FBI counterintelligence official Bill Priestap. The document notes that a friendly foreign government official, believed to be Australian diplomat Alexander Downer, relayed to the U.S. government in the summer of 2016 that Trump campaign foreign policy adviser George Papadopoulos had told him that spring that the Russians had damaging information on former Secretary of State Hillary Clinton in the form of emails. The FBI cited that information to justify the opening of the Trump-Russia counterintelligence investigation.

Justice Department Inspector General Michael Horowitz concluded in December that the investigation had "sufficient factual predication." But Barr and Durham stated that they disagreed with Horowitz while conducting their own inquiries into the Russia investigation's origins.