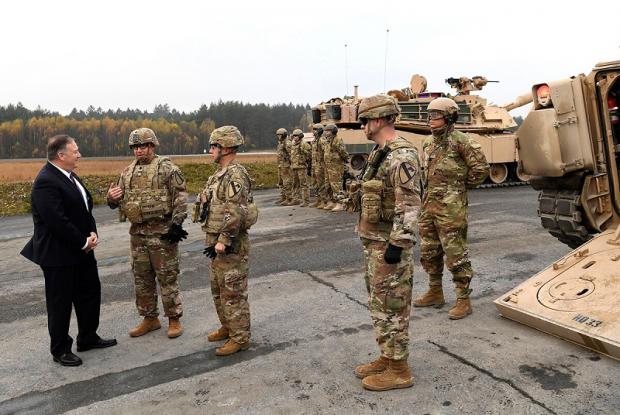 "NATO troops are at our gates. Lithuania, Latvia, Poland and … Ukraine are ordering us to hold new elections," he previously told supporters at a rally in mid-August.

Lukashenko reportedly deployed Belarusian national troops to the Western border in response, as tens of thousands of demonstrators demanding he step down after what they say was a "rigged" Aug.9 election ensuring the 26-year ruling strongman stays in power.

While it's unclear the degree to which NATO forces were actually mobilizing or on alert in prior weeks, what is clear as of this weekend is that US troops are indeed next door after having freshly arrived in preparation for two months of joint drills.

Several hundred troops arrived in neighboring NATO member Lithuania for the "pre-planned" military drills, AFP reported Saturday. Crucially the drills are near the border with Belarus, and include dozens of Abrams tanks which earlier crossed the border from Poland to participate in the war games.

While Lukashenko is likely to see it as a self-validating prophecy of sorts, Lithuania's defense ministry has stressed the war games are "pre-planned and not associated with any events in the region."

Still, Minsk has viewed Lithuania as an external trouble-maker given it immediately gave refuge to opposition head and Lukashenko rival for president Svetlana Tikhanovskaya. After she fled Belarus she's given frequent messages of support to the mass anti-Lukashenko movement in the streets.