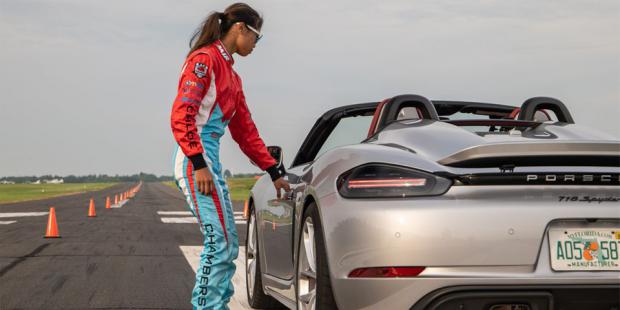 Chloe Chambers, from the Hudson Valley in New York state, has been racing karts for literally half her young life, starting out at age eight. She's got a handful of club, state and national race and championship wins under her belt already, and now a world record to go with them.

On August 21, she took a bone-stock 2020-model 718 Spyder, provided by Porsche, and weaved between 51 cones, each 50 feet (15 m) apart on a New Jersey airstrip, in a time of 47.45 seconds without hitting any. That put her more than half a second ahead of the previous record, set by a Chinese racer in a Chevy Camaro RS in 2018.

It's worth noting that previous record holder Jia Qiang had a few disadvantages to overcome, not including the fact that he was driving a Camaro. Before the record attempt, he'd never had a long enough piece of free road to practice on more than 20 cones, and his record was set on an abandoned runway full of dust, stones and potholes.

It's interesting, though, that you hear so little about agility when it comes to car marketing. Porsche has a great reputation for cars that handle beautifully, but what kind of metric can you throw down in a bench race?

Power to weight and 0-60 times are so easy to compare, but a car's ability to handle rapid changes in direction has a direct bearing on how much fun the thing is to punt down a twisty road, and it'd be fascinating to see how well a metric like that might separate the sports cars from the family wagons.