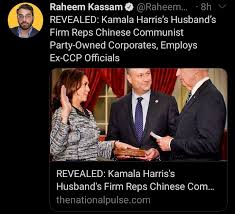 DLA Piper, a multinational law firm, boasts nearly 30 years of experience in China and over 140 lawyers dedicated to its "China Investment Services" branch.

Harris's links to the company are found with her husband, Douglas Emhoff, who has served as a Partner in the firm's Intellectual Property and Technology practice and its Media, Sport, and Entertainment sector since 2017.

DLA Piper boasts of having "long-established and embedded "China Desks" in both the U.S. and Europe" to assist their China-focused consulting, prompting questions about the firm's potential proximity to the White House could be leveraged by DLA Piper, exploited by the Chinese Communist Party, or represent a financial conflict of interest for the Vice Presidential candidate.

Ernest Yang, who serves as the firm's Head of Litigation & Regulatory department and Co-Head of International Arbitration, was appointed to the Chinese People's Political Consultative Conference (CPPCC) in 2013. The CPPCC serves as the top advisory board for the Chinese Communist Party, and Yang was promoted to the body's Standing Committee in 2019.

more proof they are already bought and payed for and not for sale.