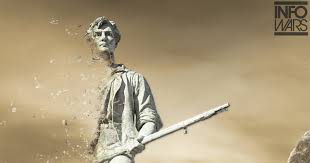 Over time, the term "militia" has been used to describe nearly any group of nonleftist armed men, and has been generally used in close connection with terms like "extremism," "violence," and "vigilante." We have been reminded of this in recent years during riots in places like Ferguson, Missouri (in 2014), and Kenosha, Wisconsin (in 2020). In both cases, armed volunteers attempted to assist private sector business owners with protecting their property from looters and rioters. And in both cases, the volunteers were described with terms such as: "violent," "militia," "extreme," and "white vigilante."

Historically in the United States, however, the term "militia" had entirely different connotations. Throughout much of the nineteenth century, militias were considered to be common institutions central to civic and community life. They were a common fixture of local festivals and celebrations, and they functioned in some ways as fraternal orders function today.

Although some critics of the militia idea have attempted to claim militias existed primarily to suppress slave rebellions, the fact is militias were common and widespread in Northern states where they had no role whatsoever in maintaining the institution of slavery. In fact, militias often served an important role in providing opportunities and community cohesion for new immigrants.