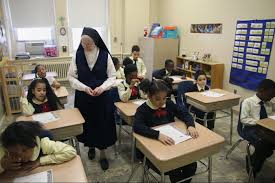 But then in April came the news: the Roman Catholic Diocese of Harrisburg announced that the school, whose origins date to 1859, was permanently closing, citing insurmountable financial stress, exacerbated by the coronavirus pandemic.

"We played our last game in March and had a postgame talk saying, 'We're looking forward to this upcoming year,'" said Ms. Hower, 68, who attended the school, like her father and granddaughters. "We never thought, 'Hey, we're never going to get on that court together again as a team.'"

As schools around the country debate how to reopen safely, a growing number of Catholic schools — already facing declining enrollments and donations from before the pandemic — are shutting down for good.

About 150 Catholic schools have closed, said Kathy Mears, the director of the National Catholic Educational Association, equal to about 2 percent of the 6,183 schools that were up and running last year. The number of closures is at least 50 percent higher this year than in previous years, Ms. Mears said.

In Boston, the archdiocese has had to close nine schools so far, and about two dozen others are on a "watch list," said Thomas Carroll, superintendent of schools for the Roman Catholic Archdiocese of Boston. In early July, the Archdiocese of New York announced that it would be closing 20 Catholic Schools.