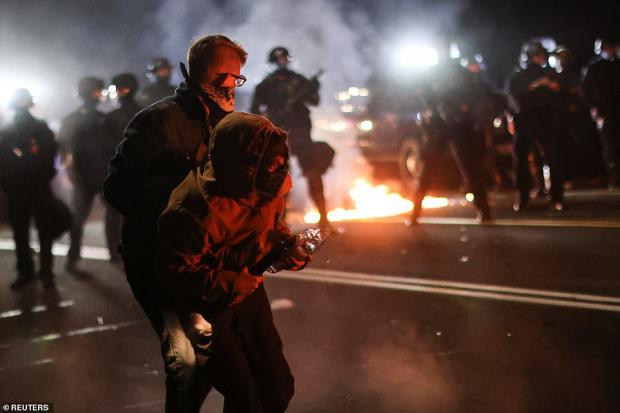 Labor Day weekend kicked-off with Black Lives Matter demonstrations taking place in numerous cities across the United States as residents continue to decry racial inequality, police brutality and the deaths of black Americans at the hands of law enforcement.

In Portland, the whitest city in the United States, hundreds of protesters continued to clash with law enforcement as nearly 30 people were arrested, a swarm of fireworks were launched into the air and one person caught on fire from a deployed Molotov cocktail.

In Pittsburgh, officers were forced to stand guard outside Mayor Bill Peduto's home as a group of demonstrators gathered outside his home with lights and bells as they called for action against local law enforcement.

Further down south, just under 20 people were arrested on Saturday in Tallahassee, Florida, during protests after a Leon County Grand Jury ruled that three officer-involved shootings were justified.

The Kentucky Derby was marred by heavily-armed Trump supporters faced off with members of the anti-Trump militia, Not F***** Around Coalition,' who also gathered in Louisville.

And anti-Trump group Refuse Fascism staged a series of protests across the United States on Saturday, as America's chaotic and turbulent summer continued.