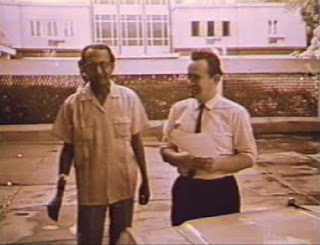 Continued from Part One and Part Two.

Bezmenov: This picture shows [part] of the building of [the] USSR embassy, and my supervisors. On the left is Comrade Mehdi, an Indian Communist. And on the right, Comrade Mitrokhin. (My supervisors in the secret Department of Research and Counter-Propaganda.) It has nothing to do with either research or counter-propaganda. Most of the activity of the department was to compile [a] huge amount (volume) of information on individuals who were instrumental in creating public opinion: publishers, editors, journalists, actors, educationalists, professors of political science, members of parliament, [and] representatives of business circles. Most of these people were divided roughly [into] two groups. Those who would toe the Soviet foreign policy, they would be promoted to the positions of power through media and public opinion manipulation. Those who refused the Soviet influence in their own country would be character-assassinated or executed physically, con-revolution.

[It's the] same way as in the small town of Hu? in South Vietnam, several thousands of Vietnamese were executed in one night when the city was captured by [the] Vietcong for only two days. And [the] American CIA could never figure out how [the Communists could possibly] know [of] each individual, where he lives, where to get him; and [how would they] be arrested in one night basically in some four hours before dawn, put in a van, taken out of the city limits and shot?

The answer is very simple: Long before [the] Communists occupied the city, there was [an] extensive network of informers, local Vietnamese citizens who knew absolutely everything about people who were instrumental in public opinion, including barbers and taxi drivers. Everyone who was sympathetic to [the] United States was executed.

[The] same thing was done under the guidance of the Soviet embassy in Hanoi, and [it was the] same thing I was doing in New Delhi. To my horror I discovered that in the files were people who were doomed to execution. There were names of pro-Soviet journalists with whom I was personally friendly.

Bezmenov: Yes! They were idealistically-minded leftists who made several visits to [the] USSR. And yet, the KGB decided that 'con-revolution,' or drastic changes in [the] political structure of India, they will have to go.

Griffin: Why is that?

Bezmenov: Because [laughs] they know too much. Simply, because you see, the useful idiots, the leftists who are idealistically believing in the beauty of [the] Soviet socialist or Communist or whatever system, when they get disillusioned, they become the worst enemies. That's why my KGB instructors specifically made the point: never bother with leftists. Forget about these political prostitutes. Aim higher.

This was my instruction: try to get into large-circulation, established conservative media; reach filthy-rich movie makers; intellectuals, so-called 'academic' circles; cynical, egocentric people who can look into your eyes with angelic expression and tell you a lie. These are the most recruitable people: people who lack moral principles, who are either too greedy or too [much] suffer from self importance. They feel that they matter a lot. These are the people who[m] [the] KGB wanted very much to recruit.

Griffin: But to eliminate the others, to execute the others? Don't they serve some purpose; wouldn't they be the ones you rely on?

Bezmenov: No. They serve [a] purpose only at the stage of destabilization of a nation. For example, your leftists in [the] United States: all these professors and all these beautiful civil rights defenders. They are instrumental in the process of the subversion only to destabilize a nation. When their job is completed, they are not needed any more. They know too much. Some of them, when they get disillusioned, when they see that Marxist-Leninists come to power—obviously they get offended—they think that they will come to power. That will never happen, of course. They will be lined up against the wall and shot.

But they may turn into the most bitter enemies of Marxist-Leninists when they come to power. And that's what happened in Nicaragua. You remember most of these former Marxist-Leninists were either put [in] prison, or one of them split and now he is working against [the] Sandinistas. It happened in Grenada, when Maurice Bishop was—he was already a Marxist—he was executed by a new Marxist, who was more Marxist than this Marxist.

[The] same happened in Afghanistan, when first there was [Nur Mohammad] Taraki, he was killed by [Hafizullah] Amin, [and] then Amin was killed by Babrak Karmal with the help of [the] KGB. [The] same happened in Bangladesh when [Sheikh] Mujibur Rahman, [a] very pro-Soviet leftist, was assassinated by his own Marxist-Leninist military comrades. It's the same pattern everywhere. The moment they serve their purpose, all these useful idiots [will] either be executed entirely (or the idealistically-minded Marxist) or exiled, or put in prisons like in Cuba. Many former Marxists are in Cuba—I mean in prison.

So most of the Indians who were cooperating with the Soviets, especially with our Department of Information of the USSR embassy, were listed for execution. And when I discovered that fact, of course I was sick: I was mentally and physically sick. I thought that I [was] going to explode one day during the briefing of the Ambassador's office; I would stand up and say something [like,] 'We are basically a bunch of murderers. That's what we are. It has nothing to do with 'friendship and understanding between the nation[s]' and blah-blah-blah. We are murderers! We behave as [a] bunch of thugs in a country which is hospitable to us, a country with ancient traditions.'

But I did not defect. I tried to get the message across, [but] to my horror, nobody wanted even to listen, least of all to believe what I had to say. And I tried all kind[s] of tricks. I would leak information through letters or lost documents or something like that, and still I got no message. The message was not published even in the conservative mass media of India.

In Bangladesh, it was nothing [to do] with grassroots. Most of the Awami League party members—Awami League means 'People's Party'—were trained in Moscow in the high party school. Most of the Mukti Fauj leaders—Mukti Fauj in Bengali means 'People's Army.' [It's the] same as SWAPO and all kind[s] of 'liberation' armies all over the world, the same bunch of useful idiots. They were trained at Lumumba University and various centers of the KGB in Simferopol and in Crimea and in Tashkent.

So when I saw that India—Indian territory—[was] being used as a jumping board to destroy East Pakistan… I saw myself thousands of so-called 'students' traveling through India to East Pakistan through the territory of India, and [the] Indian government pretended not to see what was going on. They knew perfectly well, the Indian police knew it, the intelligence department of [the] Indian government knew it, the KGB of course knew it, and the CIA knew it. That was most infuriating because when I defected and I explained to the CIA debriefers [that] they should watch out, because East Pakistan is going to erupt any moment, they said I was reading too many James Bond novels.

Anyway, so East Pakistan was doomed. One of my colleagues in the Soviet consulate in Calcutta, when he was dead drunk, he ventured into the basement to relieve himself, and he found big boxes, which said 'Printed Matter to Dhaka University.' (Dhaka is the capitol of East Pakistan.) And since he was drunk and curious, he opened one of the boxes and he discovered not printed matter; he discovered Kalashnikov guns and ammunition in there. Anyway, it's a long story.