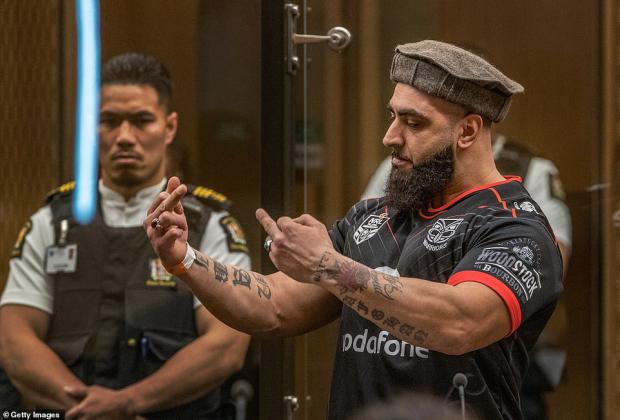 The white supremacist terrorist who attacked two mosques in New Zealand, killing 51 and wounding at least 40, has passed up the chance to speak in his own defence when he is sentenced tomorrow.

Breton Tarrant has pleaded guilty to 51 counts of murder, 40 of attempted murder and one count of terrorism, and is in the midst of a week-long sentencing hearing in Christchurch, where the attack took place on March 15, 2019.

Tarrant, who posted a 74-page manifesto online before launching his attack, had earlier sacked his defence team in favour of defending himself - giving him the opportunity to speak before judgement is passed at the High Court.

But he has now announced via a court-appointed lawyer that he will not speak during Thursday's hearing, and will instead have a statement read out on his behalf.

Tarrant's decision to silence himself comes at the end of three days of vocal testimony from his victims and their families, which has seen tears shed and angry words exchanged, along with messages of hope and healing.

Perhaps the most startling testimony came from Ahad Nabi, who lost his 71-year-old father Haj during the attack, who described Tarrant  as 'coward', a 'maggot' and 'the trash of society'.

Clad in a New Zealand Warriors rugby league jersey, Ahad raised both his middle fingers at Tarrant and flexed his muscles, while branding the killer 'weak'.