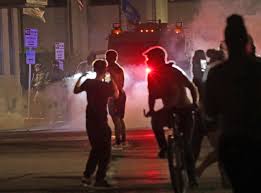 Update (1030ET): A second cell phone video of the officer-involved shooting of 29-year-old Jacob Blake on Sunday has emerged, showing the incident in a slightly new light.

The footage showed Blake fighting with officers before he took off and ran to the driver's door of his vehicle with police on his heels (video showed). The video suggests he may indeed have had a knife, and had ignored orders to drop it, before being shot.

It also suggested that Blake's girlfriend lied to police when she claimed he hadn't been hostile.

Another witness filmed part of the encounter between Kenosha police and Blake on his cell phone from across the street, but that video didn't show any scuffle with police.

Update (0950ET): Kenosha County Sheriff David Beth held another press conference Wednesday morning to discuss the deadly shootings, and other crimes committed across the city during a third night of violence.

The Milwaukee Journal-Sentinel reported that police expect to make an arrest in a case stemming from the shootings "soon", and that the FBI has been "assisting" local investigators, implying that the shooter will likely be taken into custody.

US Government Seizes The Websites Of PressTV, Pro-Palestinian Media Outlets and More

FAA says US airports will get $8 billion in pandemic relief